You’ve Heard Say That; “We’re All God’s Children.” Is That True?

July 6, 2020 · by pensiamentopeligroso · in Christianity, religion, Uncategorized · Leave a comment 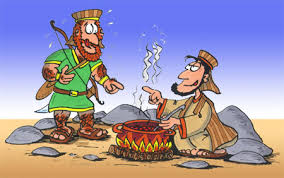 It is true that all of mankind is created in the image of God, but what does it mean to be “God’s children”?  The book of John Chapter 1 verse 12 says “ But as many as received Him, to them He gave the right to become children of God, to those who believe in His name:”  This verse seems to put some kind of qualification on what makes someone a “child of God”.  Again we are all created by God and in His image, but he does not necessarily make everyone of His creation a “child” of His.  The term “child” can also be understood as offspring.  In the book of Romans chapter 9 verse 13, Paul writes; “As it is written, “Jacob I have loved, but Esau I have hated.”  That is a reference to the book of Malachi  in which Chapter 1 verses 2 and 3 in which it is written: ““I have loved you,” says the Lord.  Yet you say, ‘In what way have You loved us?’  Was not Esau Jacob’s brother?” Says the Lord.  “Yet Jacob I have loved; 3 But Esau I have hated, And laid waste his mountains and his heritage  For the jackals of the wilderness.”

Both Jacob and Esau were created by God in His image – yes?  If so, then there seems to be a distinction between the two in God’s assessment.  One is accepted and one is rejected.  This status was conferred upon them at the time that their mother Rebecca was pregnant with them and neither had done anything to earn God’s favor or His displeasure.  This leads to the doctrine of election which infuriates the unbeliever, and even offends many “professing” believers.s  But Romans 8:14-17 makes it clear: 14“For as many as are led by the Spirit of God, these are sons of God. 15 For you did not receive the spirit of bondage again to fear, but you received the Spirit of adoption by whom we cry out, “Abba, Father.” 16 The Spirit Himself bears witness with our spirit that we are children of God, 17 and if children, then heirs—heirs of God and joint heirs with Christ, if indeed we suffer with Him, that we may also be glorified together.”

Esau was the first born which usually meant favored treatment in the Jewish culture.  Esau was a great hunter, very productive and courageous, and favored by his father.  Jacob was mild mannered, and a mama’s boy.  Jacob was also a con artist.  With all of that in mind, Jacob was preferred by God over his older first born brother.  Jacob went to Heaven, and Esau went to Hell.  Oh; that’s not fair you say?  Too bad.  We are all created in the image of God, but we are not all children of God – He chooses whom He will.

← Video Agenda 2 – Free For A Short While.
California Bans Singing In Church – No More Than 25% Capacity Or 100 People Whichever Is Lower! →