Mike Adams Tells What’s To Come As Far As Coronavirus (Covid 19) – It’s Not Pretty If He’s Right & He Usually Is Right!

– Amazon will begin shutting down fulfillment warehouses as infections spread through staffers there. Amazon.com order fulfillment will crater. Supply lines of products to many consumers will collapse, especially as certain cities go under lock-down.  See New York Panic HERE. and HERE.

– Domestic air travel will be shut down from airports and regions that are being hit the hardest: Seattle, San Francisco, Boston, NYC, Atlanta and Denver. Eventually, all commercial air traffic may be shut down for a while. Expect to see airports start to close within 10 days or sooner.

– Hospitals will be overrun in several US cities, including Seattle and NYC. We are about 3-4 weeks away from those regions becoming “Italy” in the sense of exploding cases requiring hospitalization. The near-total lack of CDC testing of US patients for the coronavirus is only going to make this situation more disastrous. (It was all done on purpose, of course, to hurt Trump.)

– President Trump will declare a national emergency. He will deploy the military to support US infrastructure (mostly medical infrastructure). The National Guard will be deployed in most large cities across both coasts. Looting and lawlessness will explode in those cities until the Guard comes in to restore order. Los Angeles may become an active domestic war zone.

– More heads of state will be confirmed as infected (not just the wife of Justin Trudeau), and this may even include President Trump. A significant percentage of Congress will become infected. Older members of the US Congress / Senate will begin to die from the coronavirus because they are all Big Pharma prostitutes and they will not use vitamin C, spirulina, elderberry or other things to boost their immune systems, so they will die as the whores they became by selling out America to Big Pharma.

– Some banks will begin to fail. Globally. It will become increasingly obvious to many that central banks may have reached their limit of influence on financial markets, and we may be looking at the beginning of the end of the current global system of debt creation. If a certain critical mass of banks fail, the cascading effects become globally catastrophic, and perhaps even fatal. We could be looking at a global reset of the entire finance infrastructure.

– In the aftermath of all this, by the way, America will have a whole new insanely horrible homeless problem as people who currently are barely holding on to rent arrangements or home ownership are clobbered by the economic shutdown. They will end up on the streets. Homelessness will explode in cities across America, coming to smaller towns that never saw it before. Homeless camps will rapidly expand in size and filth, and these camps will harbor mutations of the coronavirus, “seeding” the rest of the population in an ongoing basis that will make any attempt to permanently snuff out the virus virtually impossible.

– Some smaller cities and towns will erect their own local form of “martial law” — i.e. local militia control over all traffic in and out. The federal government’s failings will lead to a rapid decentralization away from federal resources and increased reliance on local power. In effect, many small towns will attempt to wall themselves off from the rest of collapsing society.

– By the time this is all said and done, no one will have any remaining shred of faith in the CDC, the FDA or the federal government. It could very well be the beginning of the end of the United States of America as we know it… something I have repeatedly predicted in my Health Ranger Report podcasts, where I boldly projected that President Trump would be the last president of the USA as we know it.

– All the idiots stocking up on toilet paper and nothing else will soon come to realize if you don’t buy food, you won’t need toilet paper. People in many cities are right now on the verge of total panic. NYC is already right on the cusp of devolving into widespread panic, looting and crime sprees.

– The stock market carnage has only just begun, yet sheeple will not sell their stocks until they lose a lot more money. I’m having conversations with people right now that go something like this:

THEM: Gosh, you were right, the market really plunged! I’ve lost about 25%.

ME: It’s not too late to sell your overpriced stocks, because the market will probably continue to plunge a lot more before this ends.

THEM: But if I sell now, I will lose 25%. I’d rather just hold it and wait for the bounce.

ME: If you don’t sell now, you will lose 50%. Why would you want to hold on to something you know is going to continue to lose value?

THEM: Because I don’t want to take the loss now.

ME: No losses or gains are realized until you sell the asset. You haven’t taken a loss until you sell. It seems you would rather sell once you have achieved a much more painful loss. Is that your plan?

THEM: No, I just don’t want to turn the paper loss into a real loss.

ME: You are playing mind games with yourself, and in the end you will sell in a panic and lose almost everything…

In other words, sheeple always buy high and sell low. This is why they get financially murdered during market swings. They follow the herd and believe the drivel they hear on Fox News or from Rush Limbaugh. They will finally sell once blood is in the streets and they panic. That will be the LOW of the market. That’s the time for the rest of us to buy. (Smart people buy low and sell high, and they do so without allowing rash emotions to drive their decisions.)

If you refuse to plan for the pandemic, at least plan for your funeral

If you still find yourself believing Rush Limbaugh, or Dr. Drew, or Fox News or other illiterate denialists who continue to somehow peddle the old “it’s just the flu” lie, then you should make funeral arrangements for yourself, because you aren’t likely to survive what’s coming.

In about another 6-8 weeks, everything I’ve listed above will be considered “obvious.” Right now, you have advanced warning, so use this warning wisely.

I’m not trying to sound arrogant in any of this. I just don’t have time to waste on trying to deal politely with stupid people who are already dead. Don’t waste time with them. Save your family. Stop trying to convince others. If they don’t get it by now, they’re too mentally incapacitated to survive. Be prepared to defend your supplies, by the way, because those are the very same people who will come to loot your food and leave you starving or dead after they realize that you prepared but they failed to.

Remember what I’ve always said: The greatest danger in any collapse scenario is the masses of unprepared, desperate people. That’s why we call it the “zombie apocalypse.”

You’ve also heard me say, over and over again, that cities will be the death hubs in any collapse.

Here’s today’s map from the NYT, in case you were wondering what I’ve been referring to. Notice where the outbreaks are occurring? Ask yourself this question right now: How far away do I want to be from these outbreak hubs? 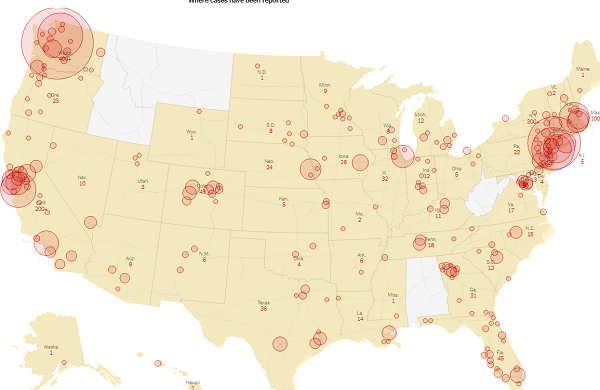 If you want to live, read Pandemic.news. If you prefer to die, listen to any CIA-controlled fake news media outlet, which is basically the entire media.

CORONAVIRUS – LAB ENGINEERED WITHOUT A DOUBT! NOW WHAT?

← 13 Minute Video – What’s Going On In The Government (“Public”) School System?
Trump – “No More Shaking Hands Is Probably A ‘Good Idea’!” Really? What About….. →
Join 332 other followers