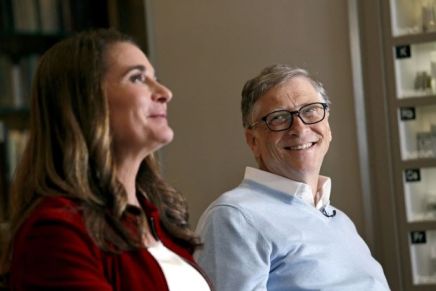 Bill and Melinda Gates in Kirkland, Wash., Feb. 1. PHOTO: ELAINE THOMPSON/ASSOCIATED PRESS
Bob Dylan’s It’s Alright Ma, I’m Only Bleeding Song for your enjoyment (quote @ 6:13)!
The K-12 education-reform movement was once led primarily by conservatives and libertarians with centrist Democrats as junior partners. But over the past decade, education reform has taken a hard left turn. Republicans are now almost entirely invisible within the ranks of its activists. This progressive capture of education reform—like the capture of much of the media and academia—will undermine the quality and effectiveness of the movement’s work.
We’ve seen this trend firsthand over two decades of work in education reform, so we decided to quantify it. In a new study, the first of its kind, we examined the political preferences of people working in education-reform groups. To identify these groups we focused on those receiving support from the Bill and Melinda Gates Foundation and the Walton Family Foundation. These are the two leading backers of school reform. Almost all major education-reform groups receive funding from one or both foundations (as have we). We then searched OpenSecrets.org for all political campaign contributions made by the staff of these groups to gauge their political leanings.
We tracked staff contributions to political campaigns in a sample of 73 education-reform organizations funded by the Gates Foundation, including Achieve, Teach For America, the New Schools Venture Fund, Alliance for Excellent Education, Jobs for the Future, Turnaround for Children, and Bellwether Education Partners. In total, we found 2,625 political campaign contributions from the staff of Gates grantees. Of those contributions, more than 99% supported Democratic candidates or the Democratic Party. Only eight (that’s eight, not 8%) of the 2,625 campaign contributions went to Republicans.
The political imbalance among Walton grantees was somewhat less pronounced. Our sample of 194 organizations receiving support from the Walton Foundation included Teach For America, KIPP, Education Reform Now, 50CAN, the 74 Media, Chalkbeat, and the Education Trust. In total, we found 3,887 political campaign contributions from employees of these organizations, of which 3,377, or 87%, went to Democrats.
The deep-blue hue of education reformers rivals that of famously Democratic precincts like Hollywood and public-employee unions. The Center for Responsive Politics reports that 78% of campaign dollars from the “TV, movies, and music industry” have gone to Democrats since 2000. Even the National Education Association, the nation’s largest teacher union, gives a larger slice of its campaign money to Republicans (7%) than do the employees of Gates education grantees (less than 1%).
Does the education-reform sector lean so far left simply because everyone in education is progressive? No. An Education Week poll shows that 41% of educators identify as Democrats while 27% identify as Republicans and 30% as independents.
The virtual non-representation of conservatives has made school reformers more open about their political convictions, even on unrelated issues. Many school-reform groups, including KIPP, Teach for America and Education Trust, have energetically embraced the anti-Trump “resistance,” adopting outspoken progressive stances on hot-button issues like immigration, tax policy and gun control. The education-reform sector risks appearing as one more progressive lobby. This appearance undermines its authority when it pushes for crucial changes like school choice, transparency and experimental new learning methods.
K-12 education, more than most policy issues, is shaped at the state and local level. Given that two-thirds or more of U.S. states are red or purple—including such reform bellwethers as Colorado, Louisiana, Indiana and Tennessee—reformers hurt their cause when they fail to anticipate Republican concerns or speak credibly to Republican audiences. And because of the left’s attachment to teachers unions and discomfort with market-based education reform, a Democrat-only strategy has difficulty assembling a majority even in blue states.
Political homogeneity helps explain many of the setbacks the reform movement has suffered in recent years, including the collapse of Common Core, the abandonment of new teacher evaluation methods, and a national stall in the expansion of charter schools. It is losing its ability to forge new coalitions and find new converts. Those who care about the effectiveness of K-12 education should think about ways to inject some red—or at least purple—into a movement that has become monochromatically blue.
Mr. Greene is Distinguished Professor of Education Policy at the University of Arkansas. Mr. Hess is Director of Education Policy Studies at the American Enterprise Institute. Their report examining the political preferences of people working in education reform organizations will be released Monday in Education Next.

← The Difference Between The Republican & Democrat Party & Rank & File Members
Video & Text Both, On The Anthropogenic Global Climate Change Hoax. →