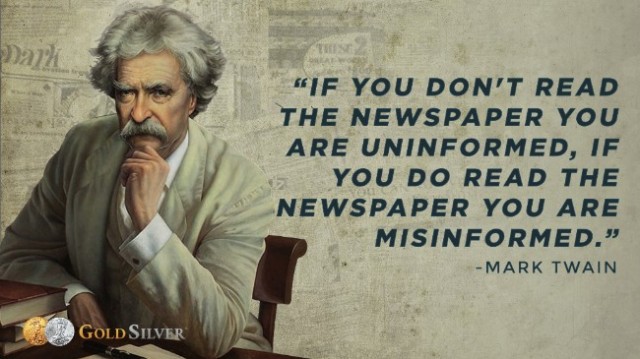 Use these quotes to amuse and amaze your friends.  They come from people of all walks of life and over a period of greater than 2000 years.  You’ll see that not a whole lot has changed.

When I was 18, I couldn’t believe how little my father knew, and when I turned 21, I was surprised to see how much he’d learned in three years.!

Walk with kings, but never lose the common touch.

We hang the petty thieves and appoint the great ones to public office.

Guns do not make you a killer. I think killing makes you a killer. You can kill
someone with a baseball bat or a car, but no one is trying to ban you from driving to the ball game.

Love God with all your heart soul mind and strength, and Love your neighbor as yourself.

The difference between stupidity and genius is that genius has its limits.

A government which robs Peter to pay Paul can always depend on the support of Paul.

Democracy is two wolves and a sheep voting on what’s for dinner.

Foreign aid might be defined as a transfer of money from poor people in rich countries to rich people in poor countries.

After eating an entire bull, a mountain lion felt so good he started roaring.  He kept it up until a hunter came along and shot him.  The moral: When you’re full of bull, keep your mouth shut.

Giving money and power to government is like giving whiskey and car keys to teenage boys.

Supreme Court Chief Justice John Jay wrote: “Providence has given to our people the choice of their rulers, and it is the duty as well as the privilege and interest of our Christian nation to select and prefer Christians for their rulers. Our laws and our institutions must necessarily be based upon and embody the Redeemer of Mankind…. It is impossible that it should be otherwise and in this sense and to this extent our civilization and our institutions are emphatically Christian.” (Supreme Court, 1892 Church of the Holy Trinity vs. United States.) George Washington said: “It is impossible to rightly govern the world without God and the Bible.”

I don’t make jokes. I just watch the government and report the facts.

Jesus Christ’s holy law rules this nation, but it has not permeated it yet.

If you think health care is expensive now, wait until you see what it costs when it’s free!

The government is like a baby’s alimentary canal, with a happy appetite at one end and no responsibility at the other.

What this country needs are more unemployed politicians.

You cannot multiply wealth by dividing it.

At any given moment there is an orthodoxy, a body of ideas of which it is assumed that all right-thinking people will accept without question. It is not exactly forbidden to say this, that or the other, but it is not done to say it. Anyone who challenges the prevailing orthodoxy finds himself silenced with surprising effectiveness. A genuinely unfashionable opinion is almost never given a fair hearing, either in the popular press or in the high-brow periodicals.

The best way to destroy the capitalist system is to debauch the currency. By a continuing process of inflation, governments can confiscate, secretly and unobserved, an important part of the wealth of their citizens.

I think that if you feel homosexuality is wrong, it is not a phobia, it is an opinion.

I have the right ‘NOT’ to be tolerant of others because they are different, weird, or tick me off.

When 70% of the people who get arrested are black, in cities where 70% of the population is black, that is not racial profiling; it is the Law of Probability.

A nation can survive its fools, and even the ambitious. But it cannot survive treason from within. An enemy at the gates is less formidable, for he is known and carries his banner openly. But the traitor moves amongst those within the gate freely, his sly whispers rustling through all the alleys, heard in the very halls of government itself. For the traitor appears not a traitor; he speaks in accents familiar to his victims, and he wears their face and their arguments, he appeals to the baseness that lies deep in the hearts of all men. He rots the soul of a nation, he works secretly and unknown in the night to undermine the pillars of the city, he infects the body politic so that it can no longer resist. A murderer is less to fear.