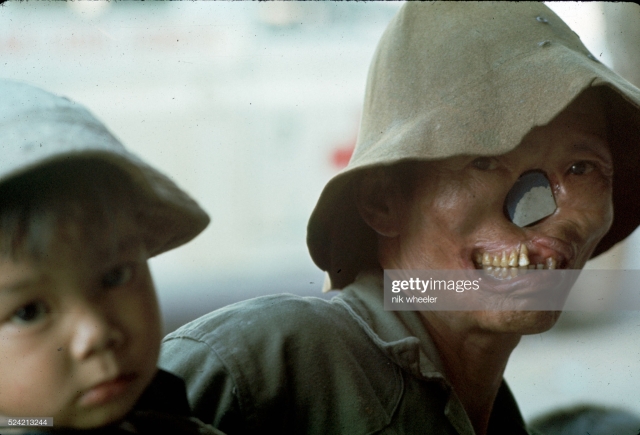 Vietnamese man suffering from leprosy holding a small child in the central highlands of Vietnam. (Photo by nik wheeler/Corbis via Getty Images)

Leprosy Pictures!  The way that leprosy is spread is through close face to face contact.  Leprosy is a bacteria.  Why is this writer covering leprosy?  Leprosy is thought to be a Biblical times disease that Jesus healed.   Judah Ben Hur (Charleton Heston – Ben Hur movie) had relatives with leprosy who were sent to a lepers colony to be kept separate for the rest of their lives.

This writer is trying to caution the ignorant and the unbelieving and foolish of this nation in particular.  Ah, but you say leprosy has been cured in America, and it’s no longer a problem.  In my lifetime, I never heard of anyone having leprosy.  Now, in America, there are 6500 known cases, and 90% are from UNSCREENED legal, and/or illegal immigrants!

Leprosy is highly contagious, and its prevalent in California where there are homeless spreading diseases.  Homosexuals have indiscriminate sex with other homosexuals, and they do not practice good hygiene – homosexuality is a filthy form of behavior, and that combined with the incredible promiscuity that accompanies it, will lead to a rapid and epidemic spread of the disease.  America must wake up, or we will be no better than Calcutta India and the so called “untouchables”!

God promised the Jews when the fled Egypt in the Exodus that he would keep them from the diseases of Egypt if they would be obedient and faithful to Him.  Is America immune to the ravages of God if we disobey?  Not likely!

← 12 Minute Video – Why The Morning After Pill Is Dangerous To The User; Not To Mention The Baby In The Womb.
Audio Sermon – Thinking Biblically About The Economy, The Government & Your Money! →